Kees Stravers took these photos (sorry for the lack of light, Kees) and wrote a nice little review of the evening at the Kulturhus in Beek-Ubbergen:

Saturday I went to the concert of Jyoti Verhoeff and Maya Fridman in the Kulturhus Beek-Ubbergen. Jyoti called the Kulturhus the Paradiso of Beek. While that may well be true, the contrast was astounding. In Paradiso, Jyoti and Maya had 70 people behind them, a big orchestra and choir. In Beek, it was just the two of them and 70 people in front of them. In Paradiso, Jyoti had a wonderful grand piano. In Beek it was an old upright piano that was so severly out of tune they had to spend all the time that was planned for the soundcheck for tuning the piano. (Fortunately a piano tuner was able to do this at very short notice.) In Paradiso, the audio was fantastic. In Beek, because there had been no soundcheck, we could not hear Maya's singing during the first few songs and Jyoti had to twiddle the knobs in between songs to get some balance between the microphones.

But ultimately, none of this mattered. Jyoti and Maya were in tune with each other as they have always been, and performed Jyoti's songs extremely well. They weaved their web of stories and emotions, and took you through their world of dark and light like nothing was wrong. The audience was mesmerized from the beginning and listened to each song quiet as a mouse, and only applauded when they were absolutely sure that the song was finished, so they wouldn't miss anything. At they end, they gave them a standing ovation and Jyoti and Maya had to come back for two encores.

It was a very nice and intimate, almost unplugged concert with a great atmosphere. The only light was from a lot of candles and a few dark blue spots, and the stage had been dressed with a lot of ivy vines. I liked hearing Wolf Song played again, a song from the first CD. It has sound effects of a howling wolf and twittering birds in it, and for some reason when listening to the song on the CD, I had always thought they were digital effects, but all of it was Maya on her cello. She can extract amazing sounds from the instrument.

Now if only Jyoti would remember to print the setlist two times for the next concert, so that Maya will know in advance what the next song will be, it would surely go even smoother next time. At least the Kulturhus has a tuned piano now. 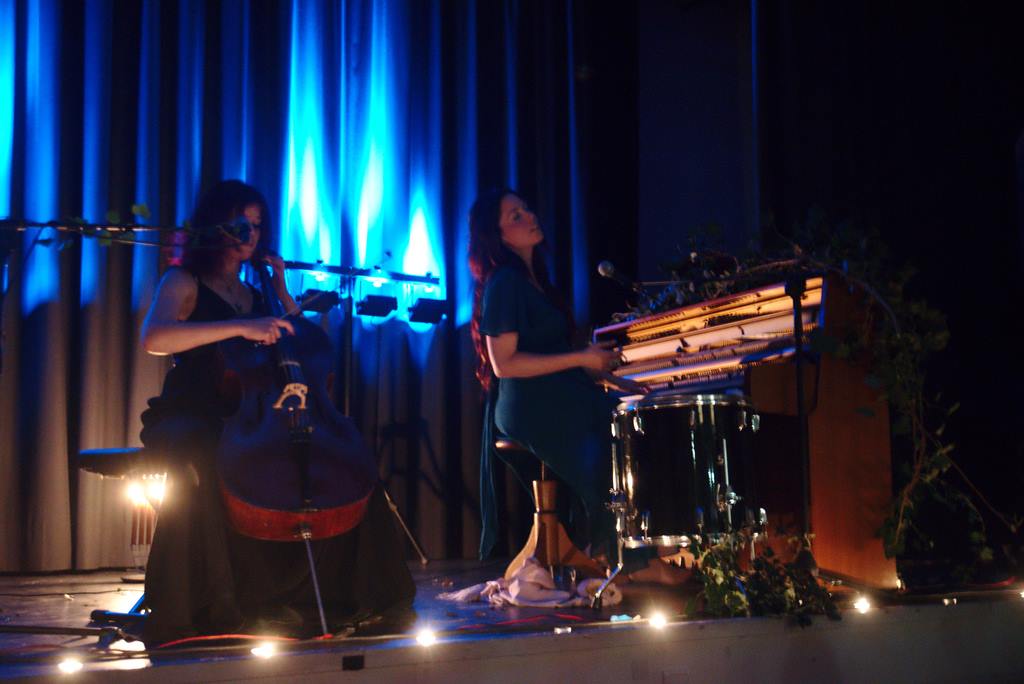